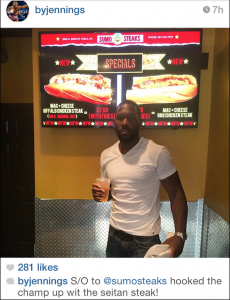 PHILADELPHIA, Pennsylvania, April 24, 2015– North Philly’s Own Cheesesteaks, Sumo Steaks, is proud to announce that their friends, fellow North Philadelphians, and big-hearted local community role models, Bryant Jennings and Jesse Hart, will both soon be making major career defining strides. Bryant Jennings will be fighting for the World Heavyweight Championship and Jesse Hart will be fighting on the card of the most anticipated fight of the century, Floyd Mayweather vs. Manny Pacquiao in Las Vegas. Sumo Steaks is equally excited for Jesse Hart (16-0,13 KOs) and D&D Management Team (Doc Nowicki & David Price) who will be fighting Mike Jimenez (17-0,11 KOs) from Chicago IL, on the biggest boxing card in history, Mayweather vs. Pacquiao. They will come together on May 2nd, in Las Vegas, NV. at the MGM Grand for the USBA Super Middleweight Title. He will be joined by his cornermen, Fred Jenkings Sr, Danny Davis, Corey AKA Hundew MacDonald and Jesse’s father, Eugene “Cyclone” Hart, along with his promoter Top Rank’s Bob Arum. 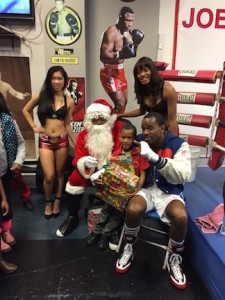 Coincidently In 1971, North Philadelphia’s Joe Frazier beat Muhammad Ali and won the World Heavyweight Championship at Madison Square Garden in which was called “the fight of the century.” It was so big the ring announcer said, “Ladies and Gentlemen, we are not going to introduce the celebrities at ringside tonight, because everybody is here tonight.”

Located in North Philadelphia, home to boxing champions, Bernard Hopkins, Danny Garcia and the late Joe Frazier, Sumo Steaks opened in 2013 and was recently voted top Cheesesteak in Philly. They have been fortunate to get to know both Jesse and Bryant and their teams through various charity events and other activities. Sumo Steaks is also a proud sponsor of boxing events in Philadelphia. For more information, contact Billy Creagh.